Living Out of a Suitcase for Three Years

For some, living permanently out of a suitcase may seem like a nightmare, but for Andrew & Christopher, it is a dream! For the last three years these Aussie guys, known as Global Wanderers, have been travelling the world as full-time house sitters, caring for people’s homes and pets while the owners go on holidays. And they have been living out of a suitcase! While Christopher prefers to unpack into an available drawer or closet, Andrew unzips the suitcase when he arrives and zips it back up again when leaving.

“It’s a great lifestyle,” says Christopher, “And one we fell into, almost by accident. We packed up our apartment in Sydney in May 2016, rented it out and headed to New Zealand to find a place to set up a new home. We used house sitting to consider our options, and now, almost three years later, we haven’t settled anywhere.”

House sitting started in Australia, even before the internet when listings were published in snail mail newsletters. Today, it is all done through various online platforms and is popular throughout the world particularly where there are expat communities. After each sit, the homeowner reviews the sitter, and these references, coupled with a profile are crucial in securing future sits. 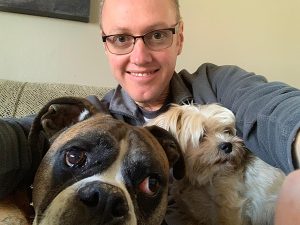 Animal selfies are always appreciated by the owners whilst they are away. Meet Tyson and Chase. 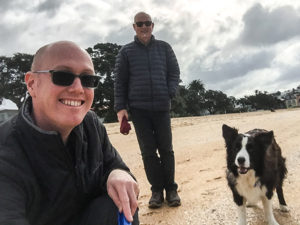 Walking with Solo on the beach in Devonport, New Zealand which was where Andrew & Christopher started their house sitting journey. 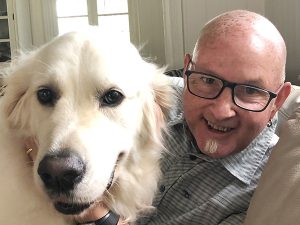 Caring for Harvey, an adorable Golden Retriever in Brisbane meant daily walks to the dog park and nightly cuddles on the lounge.

Following their time in New Zealand, Andrew and Christopher have continued to house sit across the globe, securing sits in Mexico, Switzerland, USA, UK and closer to home in Melbourne, Darwin, Brisbane, Mt Tamborine and even their home city, Sydney. “It’s a great way to travel and allows us to live like a local,” says Andrew. “We’ve lived in million dollar mansions, apartments that are like Ikea showrooms and a yurt inspired mountain home. Because we often stay for several weeks or even months, we get the opportunity to thoroughly explore an area, often finding things that locals don’t even know about.”

One such discovery was in Basel, Switzerland where they discovered red wine flowing from one of the city’s fountains on New Years Day. After posting a video of the event in a Facebook group, long time citizens commented that they never knew about the tradition. A chance meeting of a local theatre company director at American Thanksgiving celebrations in Ajijic, Mexico resulted in Andrew appearing on stage in a production of Calendar Girls. A discussion backstage then led to a house sit in San Miguel de Allende that included a full-time housekeeper, gardener and use of a car.

“You never know what opportunities are going to present themselves and we have adopted an attitude of ‘Yes’ as you never know where it will lead,” says Christopher. “Before starting our five week housesit in Erie, Pennsylvania, fellow travellers we met were worried what we would do to fill in our time. But we loved it and used the local paper to find out about Amish tours, pumpkin festivals and local theatre performances.”

The two main reasons people require house sitters are pets and home security. So far, the guys have completed more than 40 assignments and cared for a menagerie, all with their unique personalities and requirements including 25 dogs, 31 cats, 7 chickens, 3 fish, 1 bird and 2 bee hives. “We both had pets as children and love caring for animals. It can be a bit embarrassing when the owners return, and the pets cling to us rather than to their owners,” says Christopher jokingly. “And on the occasion of returning to repeat a sit, the animals remember us which is so heartwarming. Although hearing of the passing of a beloved animal that we’ve cared for does make us sad and we’ll usually post a dedication to them on our Facebook page.” 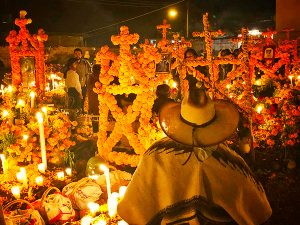 Celebrating Day of the Dead in Mexico twice – a wonderful celebration of life and death.

Joining the residents of Basel, Switzerland on New Years Day where water in a street fountain turned to red wine. 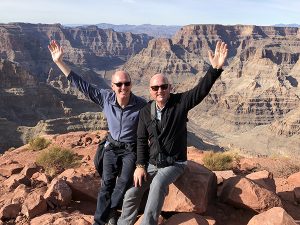 A side trip to the Grand Canyon en route between sits in Mexico and Australia.

So far the only pet that has died ‘on their watch’ is a goldfish although there have been a few trips to the vet for various reasons including removing stitches from a cat and a checkup for a dog that was limping. Every sit is different, and the guys appear to thrive on the challenges ranging from pool care, driving on the opposite side of the road and even keeping an eye out for an 86 year old woman who lived in an independent flat on one of the properties.

While house sitting includes accommodation, no money exchanges hands and while on the road, Christopher and Andrew work online to supplement their income from property and investments. “We work on a rough budget of AUD $100 per day for the two of us,” explains Andrew who tracks their finances and other statistics. “So far we’ve managed to come in under budget, and amazingly think it is cheaper to travel full time rather than live at home as we no longer have utility, telephone or other bills. We’ve also become quite minimalist in our approach, and we now collect memories and not things.”

Between housesits, there’s time to explore

The guys are currently back in Sydney while Andrew completes his yoga teacher training, and they are house sitting on the Northern Beaches. Over the three years, Christopher and Andrew have house sat 70% of the time with the remaining time being split evenly between staying with family and friends and travelling, where they have paid for accommodation. On these ‘in between adventures’, the guys have ticked many things off their ‘Discovery List’ including Niagara Falls, Frank Lloyd Wright’s Fallingwater, Stonehenge and tracking down the burial place of an ancestor of Andrew’s in Edinburgh. “Part of the adventure is finding out what is near or between places where we will be sitting, and subsequently working out how to get there and include it in the itinerary,” explains Andrew who delights in the planning of new trips. “One sit even had us staying in Gravesend, UK where Pocahontas is buried, so you never know what you will find.” 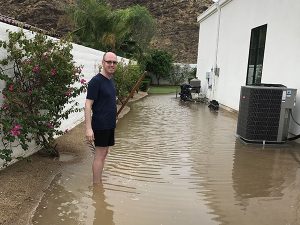 A freak storm in Palm Springs, California required quick thinking to prevent the house being flooded. 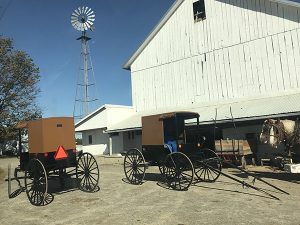 Exploring the local area in Erie, Pennsylvania included a day tour of the nearby Amish Community. 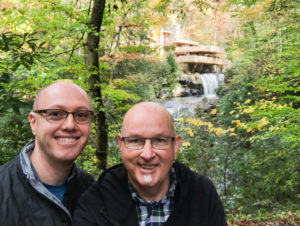 Friends all over the world

When asked what one of the unknown benefits of this transient lifestyle is, Christopher quickly responds with, “The people! We’ve met and are now good friends with people all over the world including homeowners, their friends and family and even other house sitters. We can often spend four or more hours in a cafe with other house sitters sharing stories and anecdotes. It’s such a great community with its own magazine and many Facebook groups to allow you to connect, interact and even ask for advice if necessary.”

Andrew and Christopher have no plans on giving up their suitcases just yet, although eventually will probably settle in New Zealand for at least a few months every year. “We are fully booked until October 2019 and after that, who knows?” says Andrew, “We may get sick of it one day, but until then we’ll keep living out of our suitcases. It is a brilliant lifestyle!“ 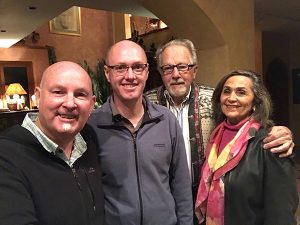 Becoming good friends with homeowners is one of the many benefits of the housesitting lifestyle. 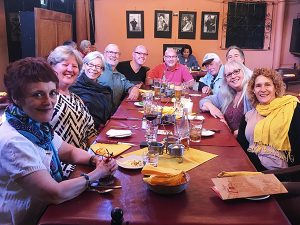 Being part of the unofficial record for the most house sitters in one place – 10 global housesitters in Ajijic, Mexico. 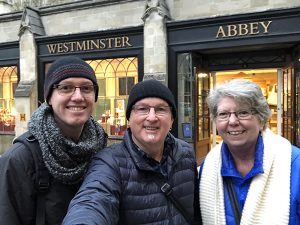 Connecting with other house sitters via social media and catching up in real life is a key part of the housesitting community.