Agra, Taj Mahal and a Fort

Our day in Delhi started with a trip on the metro which is modern and efficient. The front two carriages are reserved for women as a safe place to travel, this knowledge certainly made the recent media reporting of the rape of a young woman on a Delhi bus very real. After changing trains we ended up in Old Delhi and as we came up from the modern metro station, it was like we had gone back a few hundred years as we found a market bizarre and narrow streets filled with traders of various types.

We visited the Jama Masjid Mosque (Delhi’s oldest mosque) which had some great views over the city and then wandered through further narrow alleyways to a Sikh Temple. After donning our orange head coverings and removing our shoes, we then walked through a stream of water to cleanse our feet to enter the temple where prayers were being chanted and music played. We also visited the Sikh kitchen which feeds approximately 1500 per day and it was a hive of activity as volunteers cooked bread, peeled potatoes and washed up the mountains of plates.

The trip back to the hotel was once again by metro but by this time it was crowded. To get onto the train you literally had to shoulder barge your way in. At the station, people who were getting out pushed their way to the door and then popped out of the opening as if they were being fired from a canon.

In the afternoon, six of us from our group hired a car and visited the Lotus Temple and Humayun’s Tomb. We had been warned that tuk-tuk drivers will take you to shops and even homes to try and extract money from you so we opted for the safer, although a little more expensive option. India is certainly a country of religions and the Lotus Temple is a Bahai Temple which looks a little like the Opera House and set within lovely grounds. Humayun’s Tomb was made of red stone and inspired by the Taj Mahal. The Obamas also visited here when they visited Delhi in 2010. Dinner tonight was in a lovely restaurant and we both opted for noodles as eating the same Indian cuisine for two weeks can be a little tiresome, although it is delicious.

Next morning we left early in dense fog to head to Agra by fast train. Breakfast was included and was vegetable cutlets (think croquettes) and two slices of bread with tea and a juice. The whole train system is very efficient and it is amazing to see the amount of people that are transported on each train, made up of carriages who’s length which seem to go for kilometres.

Arriving in Agra we checked into our hotel and then headed out to Agra’s Red Fort. It was an amazing building and we had an excellent guide who was very passionate about the heritage. As we walked around we caught our first glimpse of the Taj in the distance and it was certainly much bigger than either of us had expected. As we left the fort, our photo was requested yet again by local Indians. Such events can take several minutes as every possible combination of family members needs to be photographed on multiple phones and cameras.

The afternoon saw us visit the Taj Mahal and it certainly is an amazing building. Built as a symbol of love, it is symmetrical and set within well manicured grounds. Our foreigner entry ticket included fast track access to the complex, a bottle of water and shoe coverings for when we entered the main structure. We spent a total of three hours there and could watch the sun set on this magnificent building. We had been warned about mosquitoes but didn’t see any but at times there were swarms of Indians around us as our photos were taken to capture our celebrity faces. It was all good fun and they were all very friendly.

Next day we caught a bus to a local village and then jeeps to our homestay. Once again it was foggy and we had a few near misses with cars and trucks as the driver slammed on the brakes. It was Kite Festival Day and everywhere along the road and on rooftops children and adults were flying kites. They were very simple, made of tissue paper but would fly very high. Two kite flyers would then have battles to try and knock each other’s kite out of the sky.

Arriving at our homestay, we realised it was our Best Exotic Marigold Hotel moment. It was an old fort which is currently being renovated into a hotel. Our group had exclusive access to the building and for dinner at night, we had turbans wrapped around our head and the girls were dressed in saris. With great views over the local village and the kites flying, it was a wonderful spot. Earlier in the afternoon we had walked through the local village, stopping to have a chai at the local chai shop (think a lean-to on the side of the road). All the children came out to say hello and wanted their photos taken which was a lot of fun. 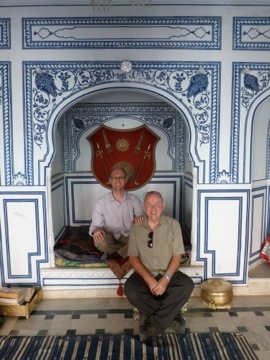 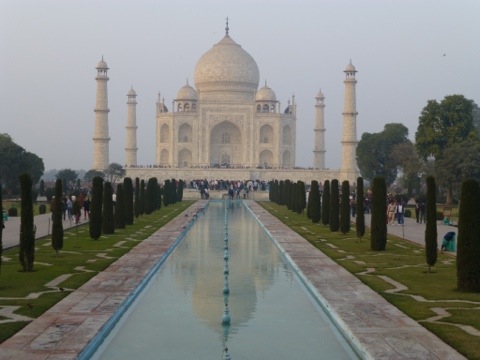 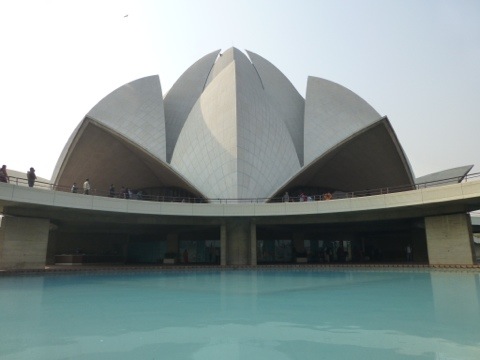