On November 25th, 2006 Christopher and Andrew participated in their first urban adventure race (similar to the TV Series, Amazing Race).  We had been looking forward to the event for ages, ever since finding out about it on the internet.

We had to meet at Darling Harbour between 7.15am-8.00am.  Once there we were boarded onto a ship and registration took place.  At around 8.30 we left Darling Harbour and were taken around to the steps of the Opera House where we were given our clue sheets.  There were 13 checkpoints which we had to find and return to Sydney University by 3.00pm.  A quick scan of the clues and we knew some of them but for the ones we were stumped on, we phoned our support person, Michelle who was able to locate things on the internet for us.  (This is not cheating and is encouraged by the event organisers).

With Michelle actively solving the clues, we set off by bus to Capital Square to have our photo taken outside Mission Australia (one of the sponsors).  A 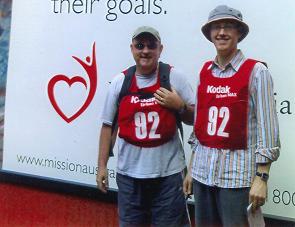 Canberra couple were on the bus with us and we knew from their questions that they were going to find locating some of the checkpoints challenging so we assisted with a clue!  After our photo we went to Paddy’s Markets where we had to locate stall 767!  After a bit of a search and encountering many stall holders who didn’t speak English we found it and were given a wooden puzzle that we were to complete before the end of the race!  At times, Christopher thought stall 767 was going to be seafood and he was going to have to eat oysters or mussels but thankfully he was spared!

Darling Harbour Convention Centre was next where we had to enter the travel expo and find the Motorola stand and successfully make a call using a bluetooth headset.  With 10 minutes before the convention opened, we sat down and completed the bike puzzle.  Once we were allowed in, we got the mystery clue required (Boost on Bathurst).  As an added bonus, because we were one of the first teams to complete the task, we both won a bluetooth headset which was a bit of a bonus. 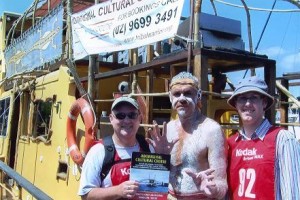 Back outside and our destination was the fish markets.  On the way however, Christopher had an ingenious idea of how to complete the task of raising $10 from the public for Mission Australia.  A group of school kids who were in Darling Harbour, cheered us as we ran by.  Next thing, we are asking them for money – 10c, 20c, whatever they could spare – and before we knew we had about $25.  Tick that checkpoint off as we ran to catch the light rail to the fish markets where we had to have our photo taken on board Deerubbin (Aboriginal word for Hawkesbury River).

It was now about 11.00am and we had completed 5 out of the 13 required checkpoints so thought we were doing quite well.  Jumping back on the light rail we went to Central and then hoped to catch a bus to Bathurst Street but ended up walking which was quicker.  At Boost we had to sip a drink and identify what fruits were in it.  Following a few guesses we then started reciting the menu until we had identified the three fruits.  Even though we thought Banana would not be one due to the price of them, we were proved wrong.  Back down to George Street where two NZ tourists stopped us and asked us what we were doing before jumping on a bus down to the Rocks to complete the sport checkpoint.  One team member had to shoot two basketball hoops whilst the other had to score a soccer goal using the opposite foot.  Andrew’s basketball skills from school were called upon and he sunk the two hoops relatively quickly whilst Christopher kicked his goal on second attempt.

The North Shore was our next destination and we had to visit the Rock Climbing Centre in Artarmon and the Rag and Famish in North Sydney.  Catching a train to Artarmon, we walked to the rock climbing and Andrew scaled the wall whilst Christopher bought water from the shop.  Back to the train station and onto North Sydney with a quick walk up Miller Street to claim checkpoint number 9 at the Rag and Famish Hotel (oldest pub in North Sydney).  Time was beginning to be against us as if we returned after 3.00pm, we incur a 30 minute time penalty. 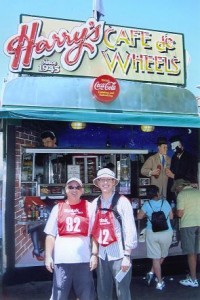 Catching a train back to the city we got off at Wynard and then jumped on another train to St James where we got off and headed to Harry’s Cafe de Wheels via the Domain.  Another photo taken and we then decided to make our way to Watson’s Bay to claim that checkpoint.  Michelle was great in giving us the bus times from William Street and after a wait of about 20 minutes we joined about another 10 teams all heading in the same direction.  Our investigation of the map and careful reading of the clues meant we got off the bus earlier than other teams and therefore had a shorter walk to the water to claim checkpoint 11.

The time was disappearing fast and we still had Centennial Park and Glebe to complete.  A strategic decision was made – try for the Glebe checkpoint and forego Centennial Park as we would incur a time penalty anyway if we tried to do both as we wouldn’t make it by 3.00pm. A walk to Edgecliff station (up a very steep hill) and onto the train to Central with a waiting bus down Broadway to Glebe.  The bus timetables didn’t work in our favour so at the last minute we abondoned Glebe checkpoint and headed straight to Sydney University.  Arriving at 2.55pm with 11 out of the 13 checkpoints we were exhausted but happy that we had had a great day.  We were surprised however and totally shocked to find the winning team had completed the cours and all 13 checkpoints in a little over 3 hours.  Needless to say they were professional marathon runners and we both agreed that a greater fitness level was necessary.

We had a great day and will definitely sign up for next year’s event.  After the results were posted we came in 120th position but results of friends who also participated didn’t seem to tally so not sure how accurate it was!!  The next event is in March 2007 so the training starts now!!