Happy New Year to all and welcome to 2008.  Continuing in our tradition, we spent this New Year Eve in Auckland and as luck would have it, we had a view of the tower from our hotel/apartment so were lucky to be able to catch a few photos from there.  We were also lucky to get a table at Viaduct precinct (think Darling Harbour) for dinner. 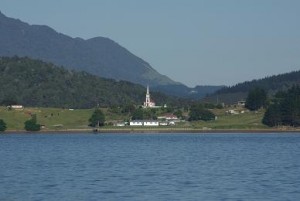 Prior to getting to Auckland we spent the day travelling from Kaitaita via the West Coast.  We originally weren’t going to take this route but were pleased we did.  We took a car ferry ride early in the morning to Rawene and travelled through some lovely farmland.  Breakfast included “coffee in a can” which is like a can of coke, just coffee!  Quite unusual and different and we can say we’ve done it but probably wouldn’t venture there again.

Also on our travels we met up again with a French couple who had been on our tour to Cape Reinga the previous day.  They were walking along the road as we passed through a small town and we pulled up and spent the rest of the day with them. 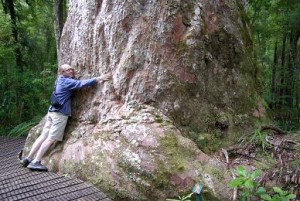 We visited the largest and oldest Kauri tree in New Zealand and did a bush walk through the Kauri forest which was great to get outdoors into nature.  We had lunch in Dargaville which is the Kumura capital of New Zealand and continued on to the Kauri museum which has to be visited to be believed.  The exhibits and displays are all to do with the Kauri tree and are absolutely amazing with many working machines and lots of replica rooms.

New Year’s Day in Auckland is a bit like a ghost town.  No doubt many partied hard and we both were concerned for the car parked in the street as we heard smashing glass and were awoken several times by yelling yobos!!  Thankfully everything was there and intact in the morning.

Today we visited the Auckland Museum and the botanical gardens where there is a outdoor sculpture exhibition.  We also went up the tallest building in the Southern Hemisphere, the Auckland tower for some great views of the city.  We were both very cautious as we walked across glass floors and it made us wonder if we will follow through on the bungee jump/canyon swing in the South Island – all will be revealed in the next few weeks.

Tomorrow we are off to Hamilton and Waitomo Caves to see the glowworms.  We are having a great time and packing lots into our days!  We must also acknowledge WWWWifi (whoever they are) as they have allowed us free internet access whilst in Auckland!!