What an adventure – chasing ourselves around the city for a day!

We had registered for this event last December so March 17 seemed a long way away.  However the day finally arrived and although we felt unprepared both physically and strategically, we arrived at 8.30 for registration and began to get ourselves psyched up for the day.  City Chase is the idea of a Canadian who has taken his idea to the world.  2006 was Sydney’s first experience of City Chase and this year, with over 300 teams, it was going to be a big event. 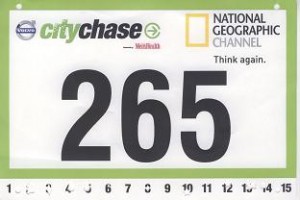 The start for the race was Luna Park.  Following registration which included being tattooed with a Volvo marketing badge and collecting our team bibs (we were team 265), shirts, backpack, caps, etc we prepared for the big race which began at 10.00.  From 9.30 we were led through a warm up and a countdown on the big screen.  The race began and we had to run to the face of Luna Park to collect our clue sheet . A quick scan of the clues and we knew we had 15 minutes for the first ferry to the city so we spent the time working out the location and opening times of most of the checkpoints – there were 14 of which we had to do 10.  Our phone support for this race was Nerida, Christopher’s cousin and she was great in locating addresses and opening times for the various locations we had to visit.  Andrew had left his phone at home (mistake 1 for the day) so we were relying on Nerida and Christopher for all our internet backup.

We jumped on the ferry and headed to the city with a train from Circular Quay to Town Hall, we then bolted down the stairs to catch the train to Bondi Junction.  This checkpoint was the furthest from the finish and also mandatory so we decided to do this first.  Upon arrival we were presented with a scavenger hunt sheet of 15 things of which we had to find 10.  We lucked out with another team already buying a box of condoms (we needed 1) so they gave us one as well as kissed Christopher on the cheek to show the lipstick mark (another requirement).  Rushing to McDonalds we collected the required straw and retrieved the carrot from our bag (we had been warned to bring one previously).  Answering a couple of trivia questions as well as visiting a store to find out the price of a pair of shoes and we were nearly done.  Another team donated their 5 cigarette butts and we had the tattoo below the waist covered with Christopher’s ankle tat.  We thought we had all 10 things so headed back only to discover we had ticked “a live animal” by mistake.  Looking around, Christopher spotted a Police Dog nearby and added that to our list to get our first checkpoint stamp. 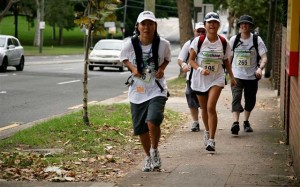 We had entered all the addresses into our GPS unit which made it easy to find our next destination – East Sydney Leagues Club.  Upon entering we had to play poker against another team.  Not really knowing what we were doing, we lucked out with a pair of Kings in our first game and won.  2 checkpoints down – 8 to go!  We then headed back to the train station and had to wait 10 minutes for the train to leave.  We phoned Nerida again to get information on ferry times and the best way to tackle some of the North side checkpoints.

Travelling back into the city we made a last minute decision to get off at Martin Place and run down the hill to Circular Quay to the Minus 5 Ice Bar.  This was an easy way considering it was down hill.  The only obstacle was running through a car ad film shoot and being asked by security what we were doing!  At the Minus 5 Bar we had to find out the date and time that the movie, The Big Freeze premiered on National Geographic Channel.  Whilst Christopher phoned Nerida, Andrew used the provided magazines and lucked out again, finding it inside the back cover!  We then add to roll a pair of dice twice and add the two numbers – we got 15 in total.  Going into the bar we then discovered we had to eat the number of ice cubes that we had rolled on the dice.  It was cold but we downed the cubes in little time and headed back outside to the warmth.  Upon reaching the quay, Andrew realised he no longer had the clue sheet (vital to our completion of the race).  He thought he must have left it on the table when looking through the magazines.  He ran back to discover it wasn’t there.  Next thing Christopher appears telling him he had it in his pocket.  Of course, if Andrew had his phone, Christopher could have phoned him to tell him – something which Christopher reminded Andrew of on their way to the Four Seasons Hotel on George Street.  The location of this checkpoint had been obtained by texting a message to a number given on our clue sheet. 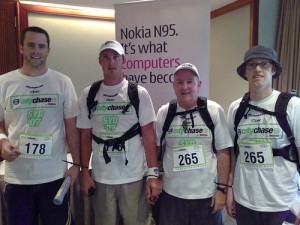 Reaching the third level of the hotel, and taking no notice of the tourists with strange looks who couldn’t work out why all these people were running through the hotel, we had a choice – be tied back to back or join another team and be tied together in a line of four.  The team behind us were keen to be in a line so we were secured together.  We then had to use a Nokia phone to go online and solve a riddle.  Our Nokia guy was very helpful and guided us to the solution.  Looking to have our bibs stamped, we then discovered we had to run to Lees Court (off King Street) to complete the checkpoint.  So still joined together we set off.  The team we had been tethered to was rather energetic and set a cracking pace.  We ran 70% of the way although our fellow team obviously were in a hurry as after we’d been cut loose, when we turned around, they were gone.  We also got the location of our next checkpoint – Jacksons on George.  Upstairs one of us had to pole dance after getting dressed up in gorgeous outfits, complete with feather boas and lipstick!  Andrew took the challenge and after shaking his booty we were off to Glenmore Hotel in the Rocks.

The GPS led us there quickly and the challenge, in honour of St Patricks Day, was to write a limerick on a topic chosen at random.  We got Russell Crowe!!!  Following acceptance by the judges, we had to go and recite it on the top of the hotel.  Our limerick was as follows:

There once was a man named Russell
Who went to visit Lord Tustle
He saw him and wept
And went home and slept
What an int’resting trip to Brussells.

Six checkpoints down, 4 to go and we were on track!!  Our last stop in the city was outside the Museum of Contemporary Art where we had to follow instructions to make a dog out of a balloon – Christopher exceled himself although the dog’s legs were not all the same length!  We then had to sell the dog to a member of the public for $20 to donate to the Children’s Hospital.  Andrew was a member of the public so we donated our $20, gave the dog to a passing kid and headed for wharf 4 to catch the 12.52 ferry to Kirribilli.  Five minutes spare meant we were able to eat something and consume water as it was rather hot! 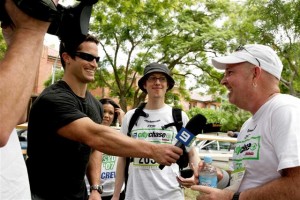 Our plan upon disembarking the ferry was to go to Kirribilli House and get a photo with a well known Australian.  As we got off the ferry we heard another team say that Ensemble Theatre (another checkpoint) was closer so we headed there instead.  Another decision had to be made – complete a Sudoku puzzle or eat live worms.  As we were digging for the worms, Channel Nine turned up and wanted to catch us on camera.  We downed the worms, Christopher washing his prior to putting them his mouth.  With only 2 checkpoints to go we decided to forget about Kirribilli House and go to North Sydney Oval and the North Sydney PCYC as they were close together.  Walking to Miller Street up a very steep hill we were starting to meet more and more teams.  Deciding to catch a bus up Miller Street was a good decision as we beat those teams who had decided to walk.  At the PCYC we became Rocky – throwing 200 punches, doing 25 push ups and 25 situps each.  Crossing back to North Sydney Oval, Christopher sewed a hem on a pair of trousers blindfolded and we realised we only had one thing to do – get back to Luna Park as quickly as we could.

A bus to North Sydney and then a train to Millers Point saw us crossing the finish line in 85th place with a time of four hours, ten minutes.  We were both excited that we had finished the course and got an excellent place. 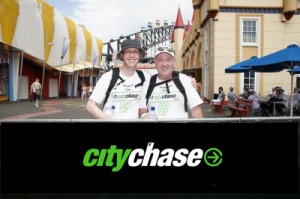 After chatting with other teams we realised we had lucked out even more!

The prizes and awards were given out with last years winners again securing first place.  They are off to defend their title at the World Championships whilst we are off to train to get fitter for our next urban adventure.