After a somewhat disappointing breakfast at the “Glaze cafe” we packed our bags jumped in the car got Tom set up and we headed to Glenelg a fairly famous beach side suburb about 20 minutes drive out of the central part of the city. Quite a nice town that seems to have undergone some major upgrading in the past year or so.We got some take away coffees and headed out of Adelaide via the Princess Highway through Mt Barker, Murray Bridge, Tallem Bend then towards the coast via Meningie.

From there the road followed the line of the coast and was as flat as a pancake. There were miles and miles of flat plains and nothing but saltbush. We came across a very small town called Salt Creek. A funny one horse town that had a sign with symbols at the towns entrance showing Petrol, Accommodation, Toilets and a Rest Area. However, the Petrol and accommodation symbols had been crossed out. So all one could assume that you could do in salt creek was rest and have a pee!!! Hence we drove on to Kingstown SE. I was around lunchtime so we decided to get some Calamari and chips and sit down by the ocean and take in the view.The wind was blowing a gale and a storm seemed to be brewing out at sea so we ate up and drove on to Cape Jaffa. 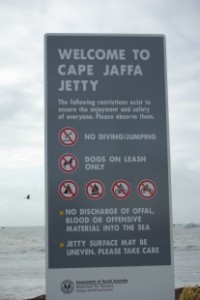 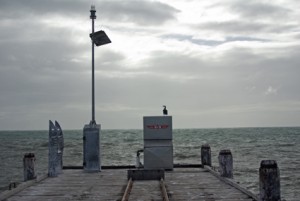 Cape Jaffa is famous for the Cape Jaffa Jetty, try saying that 3 times quickly! As you can see by the Jetty sign you’re not allowed to do much on the jetty. Someone should have told the hundreds of birds that inhabit it because the Jetty was covered in all kinds of bird shit! ~ YUK!!!

Next stop was a place called Robe. On the way to Robe we passed a sign saying this way to Penola. I had never heard of it before but as Andrew pointed out to me it was quite famous as this was the town that Sister Mary MacKillop was born. Ummm that’s interesting I said has we speed past the turn off to Penola much to Andrew’s displeasure. Robe was a quaint town, not much happens here in winter as was proof when we drove down the main street but none the less a nice seaside town.

The next port of call was Beachport. We had decided that if we made it this far today that this would be our stopover point for the night. We arrived about 4 pm and called by the visitor information centre to get some suggestions on accommodation. We settled on The Beachport Motor Inn. Before going to the Motor Inn we did the 2 km tourist drive ( as was suggested by the woman at the tourist information centre) which was over in about 5 minutes. So that was Beachport. They only have a permanent population of 400 people however I think that 395 of them must have been away on holiday.After a rest up we headed off to Bompa’s a local restaurant within walking distance of our accommodation. The only living thing we saw on our walk to and from the restaurant was a local stray cat sitting at the side of the road. Bompa’s was lovely, we had a really nice waitress and the food was excellent. we both had some steaks with mash and veggies and finished dinner off with some yummy apple and coconut crumble for dessert.

Having drove some 500kms today we were both ready for an early night and as I wanted to get up a sunrise to do some photography down at the local pier the bed was calling.