The alarm went off a 5.45am for us to head down to the pier to get some sunrise shots but as we left the motel we noticed that the skies were looking very overcast. As we were already up we headed down to the pier. Andrew stayed in the warmth of the car whilst I set up my tripod and got my camera organised. I took a number of shots over the next 40 minutes. None came out that great due to the sunrise being obscured by the cloud but here is one below to give you an idea of the quietness of Beachport. We did the tourist drive again to see of there were any other vantage point to get some photo’s but the weather was not playing in our favor this morning. 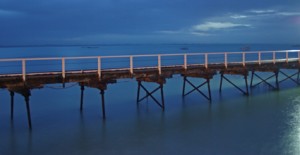 We headed back to the Motel got showered and packed and headed off at 7.30am bound for Mt Gambier via Millicent. We arrived at Mt Gambier about 8.45am and were both ready for breekie. We stopped at a local cafe recommended by the towns newsagent. After a nice breekie we headed for the Tourist information centre to get a local map. with map in hand we headed for the Umperstom Sinkhole. This sinkhole was formed due to the collapse of  underground limestone being warm away by water over many years and then suddenly the ground just subsides leaving a huge whole in the ground. You are able to walk down into the sinkholes which have been planted out with beautiful gardens.

We then drove up to ” Blue Lake”. Made famous for it’s luminous blue colour ( or so the tourist brochure told us ) Unfortunately it only remains this luminous blue during the summer months. So we were were confronted with a standard blue/grey lake colour just like any other. As one local yelled out to us when we were at one of the many lookouts over the lake ” Your a few weeks too late ! ” Ummm why don’t you rub it in then !!! I thought.

So with our Blue lake experience being somewhat Grey we headed off to Port MacDonnell, crossing the South Australian / Victorian border  into the small town of Nelson. Whilst at Nelson we came across a Factory that had these huge white tube like shapes in a production yard at the back of their factory. They were approx 15- 20 metres long flat a one end then opening out to a tube shape about 3 metres across at the opposite end. They looked quite impressive but we had no idea what they were. But we were about to find out in about another 10 kms.

10kms on from Nelson we came across Australia’s biggest Wind farm. Dotted along the hills were numerous huge white windmills piercing the landscape and turning at a rate of knots.They actually look very peaceful off in the distance with rolling green hill beneath them and cows totally ignorant of there existence.We came across a viewing platform where there was a information chart showing the details and specifications of the construction of the windmill and low and behold there was a picture of these hug white tube shapes we had seen 10kms back down the road. They were actually the propeller blades of the windmills.Puzzle solved !

We then motored on to Post Fairy where we had lunch at the Wine Bar Cafe.We did a quick drive around town via the Wharf area then continued our drive on to Port Campbell via Warrnambool. As time was getting away on us we decided to skip stopping at Warrnambool and keep drive towards Port Campbell which would be our next overnight stop. About 10 kns out of PC we came across a Policeman standing  with a white bucket at his feet in the middle of the road doing. It turns out he was doing random breath tests and the white bucket was what he was using to dispose of the breathing tubes. So after Andrew blew his best breath we were on our way to Port Campbell. We stopped at a weathered rock formation known as London bridge and few other vista points just before reaching Port Campbell

We had pre booked our accommodation at  Eastern Reef Cottages.The cottages had all been built by the couple who rang the accommodation out of recycled timbers and mud brick. They were very cosy and just far enough out of town in a nice peaceful valley. After unpacking our gear we headed for downtown PC only to find that it was alot smaller than both of us had imagined. After a quick scout around for where we might have dinner we drove out of town towards Loch Ard Gorge for a photo stop then on to the famous 12 Apostles ( which are now really 8 Apostles due to the collapse of several of these rocky outcrops over the past few years ). Unfortunately the weather was not great by this time. The skies were heavily covered in cloud, the light was poor and the sea mist was very thick. Not a great combination for taking the photo’s I had dreamt of taking. We decide we would come back at sunrise and see if our chances were better then.

We headed back to the township of PC and stopped at Nico’s Pizzeria.  We meet a nice Hippy couple from Byron Bay on the NSW north coast. They were spending 4 months travelling around Victoria. They had a 4 wheel drive and would just pitch a tent when ever they came across a place they liked. They had also walked part of the Great Ocean walk which is one walk I would like to do sometime in the future.

Anyway, the Pizza was nice, the company was engaging but it was time to head back to our cottage and hit the sack !

Another early morning awaits us.