Kerala Backwaters & Finishing in the South

The trip from Periyar to our next destination saw us take private vehicles down the mountain, stopping a few times to look at rubber plantations, have a cuppa and take in the vistas!

We then caught a boat to the Kerala backwaters and our homestay for the night. It was a pleasant change from the typical Indian “hustle and bustle” and without traffic, it was very quiet and peaceful. It was much hotter as we were now back down at sea level. In the village where we were staying, we were split into various households. We stayed with a retired fertiliser magnate whose English was very good and whose son once worked for Intrepid Tours. We were greeted in traditional Indian style with red coloured powder applied to our foreheads as we entered the house. We were made to feel very welcomed in their home.

Christopher and Jenny wandered around the local area taking photos and came across the local school which was just finishing up for the day. They were both mobbed by the primary school aged school kids all wanting to have their photos taken.

Later that afternoon we went for a walk around the local village. We were shown how they make coir rope from coconuts. A walk through the rice paddies and a paddle boat trip back to our homestay was very relaxing and informative. We awoke to beautiful water views although Christopher was sick so took it very easy including a sleep on the boat trip.

An hour and half boat journey up the river was the beginning of the next day. We went through a duck herd of about 1000-2000 with three locals herding them along the river. A bus was waiting to transport us back to Cochin and on the way we visited the oldest synagogue in the British Empire which was small but quite beautiful. A quick walk through the Dutch Palace which explained the history of the Dutch in India and we then arrived back at the hotel our tour had left from 2weeks earlier.

Tonight we farewelled six of our travelling companions as they were not heading to North India. We had a farewell dinner in a more upmarket restaurant tonight although the food was no better than some of the local restaurants we had eaten in.

Our flight to Delhi was scheduled for 7.30am so we had an early start to get to the airport. It was quite an ordeal with security as bags were scanned at every point and all hand luggage had to have name labels attached which were stamped at one of the checkpoints. We had been warned that flight delays do occur but our flight left and arrived on time. Arriving in Delhi, the Indira Gandhi Airport was very modern. We organised a pre-paid taxi with our Canadian friends on the trip, Ross and Carol and within an hour we were at our hotel.

Delhi is a pretty crazy city, although in comparison, not as crazy as Cairo. The local tuk-tuk drivers are more persistent and one needs to be aware of scammers. Tonight we met our other travelling companions who would join us for the Northern India part of our trip – 2 New Zelanders and 2 Irish. We also have a new leader for the North. 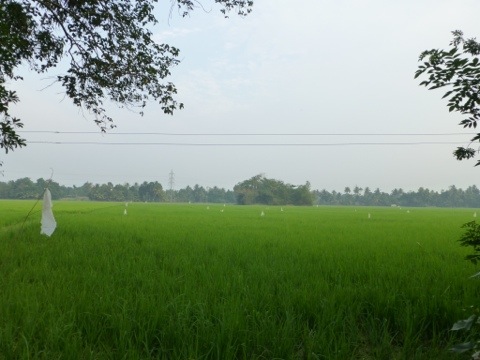