After five and half hours we arrived in Palenque! The roads were very windy and in some parts washed away and the road was down to less than half a road. This coupled with mist, fog and the occassional rain made for a seat gripping trip!!! We travelled up over mountains and it appears that the dispute about the highway being built between San Cristobal and Palenque still hasn’t been resolved. We travelled on OCC bus this time as ADO wasn’t an option for that route and we are confirmed ADO patrons. The driver had difficulty with speed humps (of which there are many in Mexico) as he would come to a complete stop, crawl over them and then speed up again.

The guide books are correct in terms of Palenque – the only reason you come there is to see the nearby Mayan ruins. Our hotel (recommended by other travellers in San Cristobal) was very close to the bus station so we walked to our hotel which was very nice. It had air-con and as we were in jungle terrain it was needed. Not long after we arrived the downpour started – got to love the tropics.

The next day we caught a collectivo to the ruins – just stand on the side of the road and they come along and pick you up – terrific system and only costs 10 pesos (about 80c) for the seven kilometre trip. The ruins were clouded in mist and surrounded by lush tropical jungle with the sounds of the spider monkeys calling nearby. 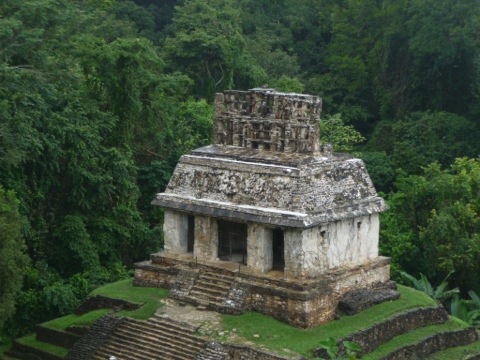 We decided to not engage a guide and spent two hours walking around the complex, having fun taking lots of pics. We bumped into a British couple that we had seen at both Oaxaca and San Cristobal – amazing how our paths keep crossing. Similarly, we have seen the same Australian couple a several times who ended up staying in our same hotel, catching the same bus and live in Newtown – it is a small world after all!!

The museum at the Palenque ruins is reportedly very good but due to a power failure it was closed. The gift shops were still open so we had a bit of a browse before heading back to town. Our visit to the town centre was short lived as there was very little to see so we returned to our hotel to escape the humidity and had a nap.

Nearby the ruins is a hippie commune which we had considered staying at originally and thought we might go there for dinner as lonely planet said one place was very good. However the collectivos stop at 6.30pm and we were left standing on the side of the road until a friendly Mexican informed us of the situation so we decided to eat back at the hotel.

The next morning we departed early, bound for Merida which is the capital of Yucatan state on the eastern coast of Mexico. It is a typical Mexican city, organised in a grid pattern and streets are numbered logically. The street names used to be animals but after one of the mayors visited New York City, they adopted the same system. Our hotel was a little out of town but a 30 minute walk found us at the main town square, complete with cathedral, government buildings and beautiful architecture which was influenced by the French. This year (2012) Merida celebrates their 470th anniversary so there were free concerts around the city. We had dinner and stayed for the folkloric ballet performance in the streets. It was very colourful and included maypole dancing and balancing a tray of glasses and tequilia bottles on their heads whilst spinning around.

Next morning we joined a free walking tour with a bilingual (English and Spanish) guide of the town centre. It was most informative and included visits to historical buildings, major murals and the Cathedral. 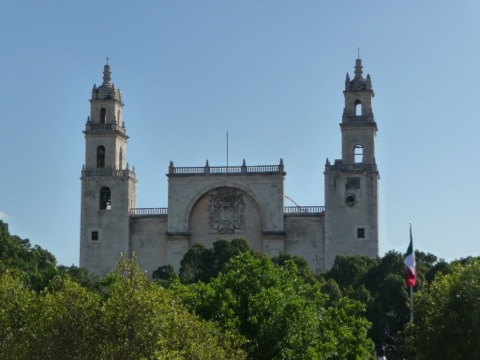 We have noticed that as we have made our way from west to east across the country, it has become less religious, more Americanised and more expensive. Christopher uses beer prices as a guide and we have noticed they have doubled during our trip. The other thing we have noticed are the evacuation signs which are quite complex and cover fire, earthquake and hurricane as well as flood! Mind you, by the time you read the sign and interpret it, I think the emergency may have passed. 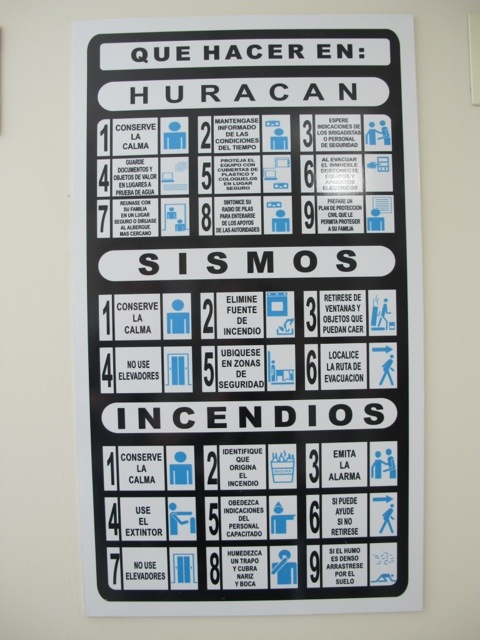 One of the main streets in Merida is very much like a French boulevard and it made for a pleasant walk, stopping at the odd monument along the way. There seemed to be very expensive residences along this street as well. Another full day in Mexico.