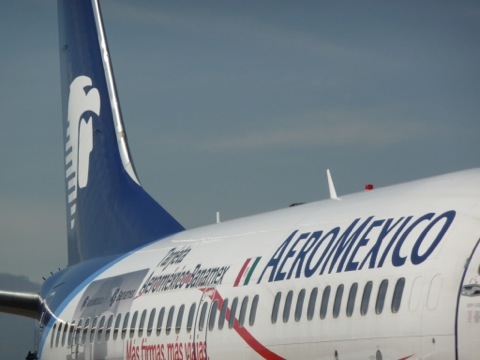 We arrived at San Cristobal de las Casas after flying from Oaxaca to Mexico City and then changing planes to fly to Tuxtela Guiteraz which is the nearest airport to San Cristobal. Christopher was desperate for a chai from Starbucks so, despite the short layover time we went and got one. Of course, our names were called over the PA so he scoffed part of his chai on the way to the gate, obviously with plenty of time to spare as we then sat on the bus near the terminal for ten minutes – he could have finished his chai after all!!

Domestic flights in Mexico appear to be consistent. To fly anywhere within the country you need to return to Mexico City. Refreshments available during the flight include lemon flavoured peanuts which are quite tasty but after the third packet and no lunch in sight, one can become a little over them.

After landing at Tuxtela which appears to be (and actually is) in the middle of nowhere, we then needed to make our way to San Cristobal which is about an hour by road. The next bus was four hours wait so we opted for a taxi which is a bit like a lottery where you choose blue, red or green, pay 600 pesos ($40) and then go outside. The taxi drivers then swamp you to see which colour you picked to see if they got the ride. We picked blue and our taxi was very good – a new VW. There were a lot of green taxis waiting so it wasn’t a green day obviously!!!

Our bed and breakfast in San Cristobal was fantastic – Bela’s B&B – run by an American Mexican and very comfortable and central to the city. After settling in we went for a walk downtown and grabbed some dinner at a co-operative that supports local groups. The food was very tasty and we actually returned there a few times during our stay. 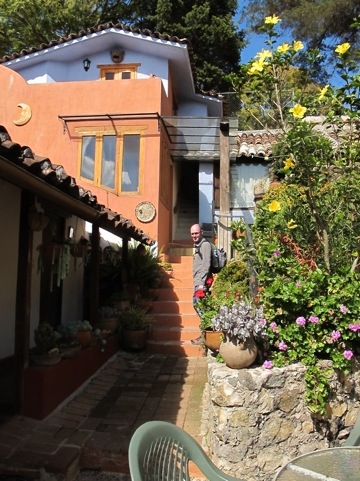 The next morning we went on the best tour we have ever been on! Our tour guide, Alex took us to two local indigenous communities in the surrounding hills. The first community was Chamula who still practise very traditional customs and have their own police force, language, clothing and church. We spent about an hour in the church, St John the Baptist which was quite amazing. 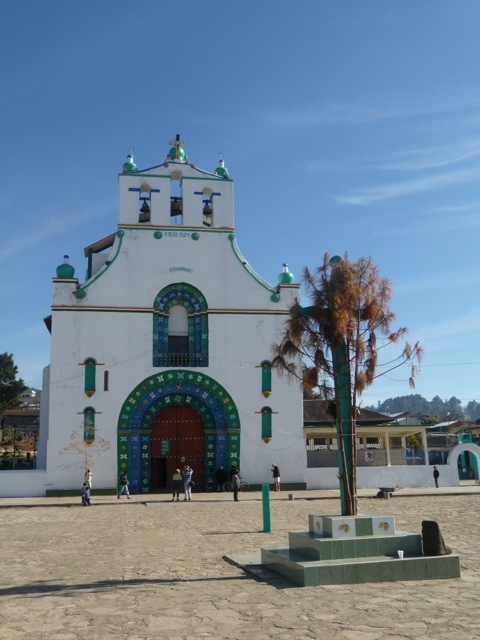 The Spanish during their conquest had attempted to get the Chamul to convert to Catholicism but the Chamula adopted John the Baptist as their leader as he was the one who had baptised Jesus. Therefore, only the sacrament of baptism is recognised in this community. Taking of photos is strictly limited in the village and definitely not within the church or of people. Tourists have been gaoled for photographing people. The belief is that by taking a photo of a person, you are taking their spirit which will weaken them and make them ill.

The church is very different to any other church. The floor is totally covered with pine needles and there are no seats or pews. The smell of pine and smoke from the burning candles is the first thing you notice when you enter. People are seated on the floor either singularly or in groups and begin lighting 100’s of candles and praying. Chickens and roosters also accompany them as do bottles of coke! All of this appears strange until Alex explains that they have come here for a cleansing ritual to get rid of evil spirits. The chicken is rubbed over the person with the illness to draw the sickness out of the person and into the chicken. Following this the chicken then has its neck wrung to kill the evil spirit and is then taken to the persons home and buried. Coke is then drunk as this helps the person burp and further expel any remaining evil spirits. This may all sound a little strange but being a witness to this was something truly special. It may be different to our understanding of the world but they certainly believe in what they are doing. 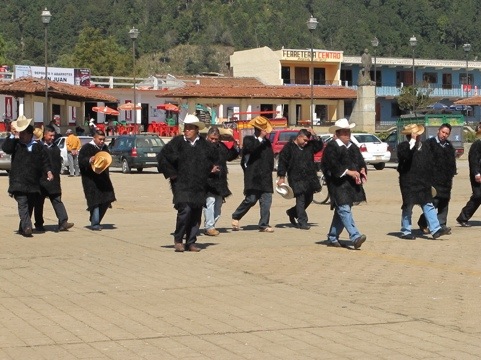 During the hour we were at the church a band of musicians arrived and began their way slowly through the crowds towards the front of the church where we were standing. There are a number of holy men that accompany the band and lead them in prayer. All of a sudden and without warning one of the holy men give a signal to two men at the back of the band. They then run to the back of the church, go outside and set off some of the loudest fireworks we have ever heard. The fireworks are held as they are ignited and Alex said it was not uncommon for fingers to go flying!! All this was done in preparation for the celebration of St Sebastian whose feast day and festival is coming up. Alex is friends with many people of this community so we were priviliged to be offered posh which is “rocket fuel” – 45% proof. It certainly warms your belly! Whilst you should never refuse an offer of posh, many carry a little jar to pour it into for later.

There were many statues of saints down both sides of the church with flowers. It is a huge honour in the village to take care of one of these saints and in fact people sign up to take on this responsibility for a year. We went to the home/altar of Saint Peter which had the statue along with lights and decorations with incense burning. The responsibility of taking care of a saint for a year can cost up to $20000 as you need to hire musicians during festivals, buy fireworks, posh etc etc.

A quick visit to the cemetery was next where old people are designated with a black cross, young people with a white cross and blue/green for in between! There are no major headstones and on the day of the dead (November 2nd), families return to the cemetery and bring flowers, food and drink and wait for their ancestors to return and celebrate with them. 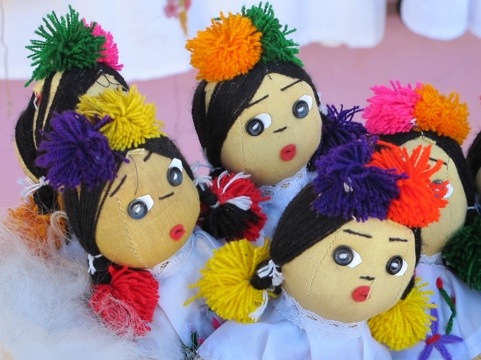 When then spent an hour looking around the local markets before heading to a neighbouring community called Zinacantan. These people could not be any more different from the Chamul. They are farmers, growing anything from corn to flowers and everything is done without the aid of any mechanical farming equipment. It’s all purely people power. Each family will decide which of the children will go to school and which will remain home and work on the farm for the rest of their lives. It may all seem such an old world way of doing things but everyone seems happy as they wave to us as we drive by their farms.

Our next stop was to have lunch with a local Zinacantan family in their Adobe home. Black tortillas with beans was the order for the day! Very tasty and the tortillas were made in front of us. We also bought a wall hanging which had been made by the mother of the family. Another moving experience. We then went to the church in the Zinacantan village where they were having a celebration. The costumes were very colourful and all community members wore them with pride. 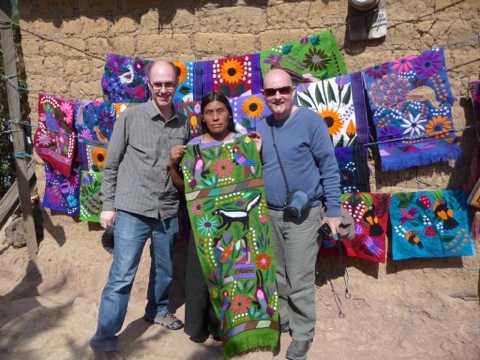 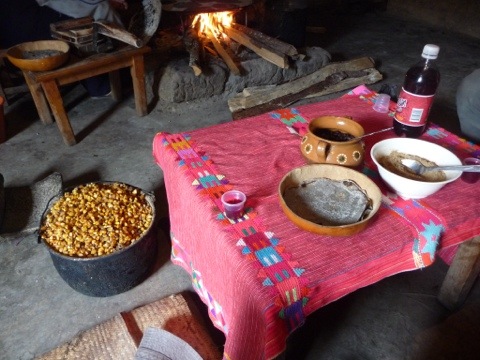 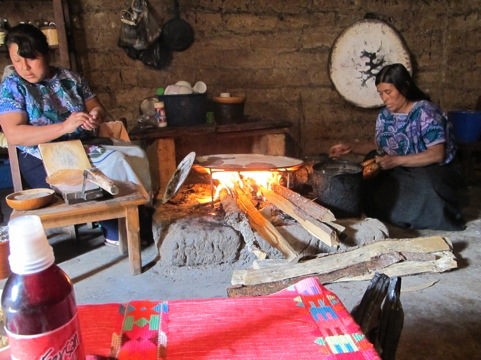 We then returned to San Cristobal and after a quick rest walked downtown and looked in the art and craft shops and visited the main church. San Cristobal has a lovely quaint, rustic feel with cobble stone streets.

Our last day in San Cristobal we spent walking. We climbed to the top of the hill where there were magnificent views from yet another church. We also visited the local markets which were most interesting and included fruits, vegetables, beans, candles, incense, illegal dvd’s and chicken and meat which was displayed without refrigeration. The Mayan Medical Museum was small although interesting. However the importance of the mid-wife in Mayan culture meant it could have been more aptly named, the Maternity museum. We chose not to have a healing although the principals of Mayan medicine are similar to many natural therapies known to Westerners. 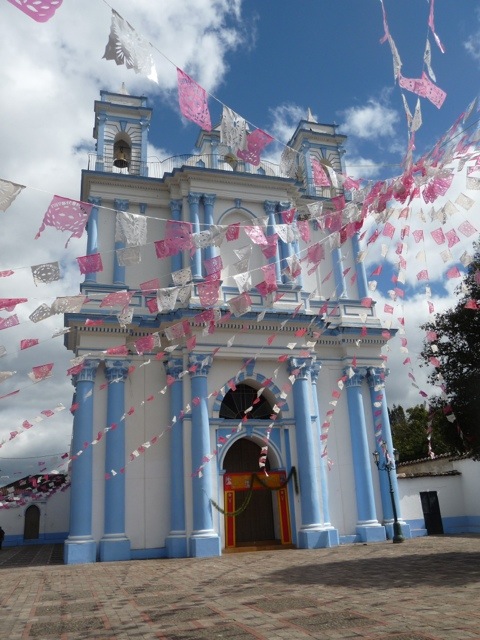