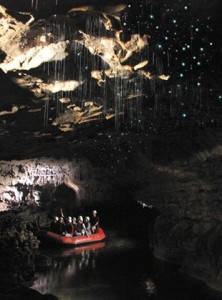 A definite highlight of our trip so far was Waitomo Caves Tour.  We decided to go on a smaller tour rather than with the big tour operators and we were not disappointed.  Called, Spellbound our 3 and 1/4 hour tour only had 5 people on it and it was truly amazing.  The glow worms were in huge numbers in the cave and the guide was extremely informative.  The tour included a boat ride through an underground river and we were given plenty of time to look at the worms, meaning our eyes were given time to adjust to the low light.

Following the caves after lunch we travelled to Hamilton to have a look and after a half hour stop (it was enough) we headed for Cambridge which is the horse capital in New Zealand with many Melbourne Cup winners being born and bred in this area.  The town was modern yet quaint with many cafes and beautiful buildings and shops.  In NZ, the day after New Years Day is a public holiday although no-one has yet been able to tell us what the reason for the holiday is.  Most just say, “The day after New Year Day”!

Yesterday we travlled to smelly Rotorua and we were pleased we weren’t staying there.  The mud pools are very unattractive and the sulphur wafts get too much.  We did take a walk through a forest of Californian Redwoods which were planted over 100 years ago.  We also visited “The Buried Village” which was buried as a result of a volcano erupting nearby in the 1830’s.  Our Maori guide was a decendant of the local Maori people and she was delightful.  Then onto Taupo which is built on the largest lake in New Zealand and it was very pituresque.  We had pizza at The Volanic Kitchen, overlooking the lake followed by a drive around the lake and an ice-cream to finish the night.

We are currently in Napier which is a town that was rebuilt in the 1930’s following an earthquake.  Many of the buildings are in Art Deco style which gives you a feeling of walking back in time.  We will stay here tonight and hope to do the Art Deco tour either this afternoon or tomorrow.  We have bumped into friends from Australia in the visitor centre – neither of us knew we would be in New Zealand and will probably have dinner with them tonight.