We left Sydney at 12.15 bound for Singapore, travelling on the A380. We were very fortunate with a very obliging hostess who insisted we have a Singapore Sling and then later on, appeared with champagne and chocolates which she said she had “brought from other places” (Business Class). After a 3 hour layover we continued onto Kochi and met 3 of our tour group on the plane – 2 kiwis and an Aussie. Andrew got pulled up at security and the attendant was insistent I had gold coins in my bag. He took little convincing that I didn’t and we soon cleared customs and our driver was there to meet us. It was an hours drive to our hotel and the bed was very welcome.

The next morning we walked around Fort Kochi and the waterfront which is strewn with rubbish. There are large Chinese fishing nets that are manually lowered into the water and then hauled out with the catch. The fish is then sold along the waterfront and whilst there is some ice, the flies are more plentiful and we noticed an odd baby shark in the days offerings. We continued to walk around and explore Kochi before returning to our hotel, checking out and travelling by Tuk-tuk to the Intrepid hotel where we would stay for two nights. We had lunch in a local restaurant but we couldn’t have a mango lassi as there was no power. It is quite common for blackouts we have discovered but if you wait a few minutes, the generators will start up and with a flicker the lights and electrical devices start up again. It can be rather disconcerting however when such a blackout coincides with you plugging something in!!

That evening we met part of our tour group, some of whom joined us subsequently due to missed connecting flights etc. We are 12 in total – 5 Australians, 4 Kiwis, 1 from Switzerland and our 2 friends from Canada. Our guide, Tofik is a local of Kerala which is the state we are currently in. Following our orientation we had dinner in a local restaurant. It is very hot and humid and air conditioning is a welcome relief when you can find it and between the blackouts!!

Yesterday we walked around Kochi with our guide and the group and caught a ferry to a nearby island. It is rather crazy as it is loaded and unloaded and includes cars, motorbikes, tuk-tuks and passengers. At 2 ruppee (less than 5 cents), it is very economical. After returning to Fort Kochi we visited the Biennale (the first one in Kochi). It was very similar to Sydney’s version with some very interesting artworks – some of which needed explanation and some, even with the explanation didn’t make sense.

One of the goals of our first two days in India was to find a SIM card for my wireless modem to enable us to have internet connection when on the move. We finally found a shop who would sell us one but we had to apply including filling in a long form, providing copies of passport and visa as well as a photo!! This process then meant we had the card but had to wait 24 hours for it to be processed and activated which included verbally verifying the information I had provided on the form. A return visit to the shop and a helpful gentleman means we now have internet. The increased paperwork is as a result of terrorist activity. The phone shop was something quite amazing with people constantly coming up and buying phone credit, all of which is recorded in different exercise books for each different provider. All of this happens concurrently with one person completing part of one job before starting another and he eventually gets back to the original customer.

Last night we attended a performance of a traditional Indian theatre – Kalakhari which takes six years of study to master the hand gestures and facial control required. It also involves the application of make up for about an hour before the show and it was amazing to watch the performers transform themselves. Performed entirely by males, they certainly put many of Sydney’s drag queens to shame.

We are currently on the train heading to Ootacamund which is a four hour journey. It is in the mountains so will be cooler 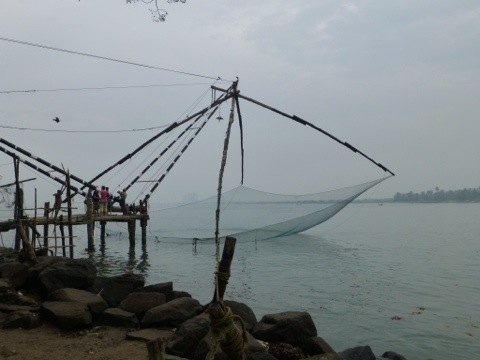 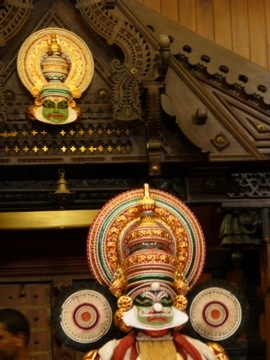 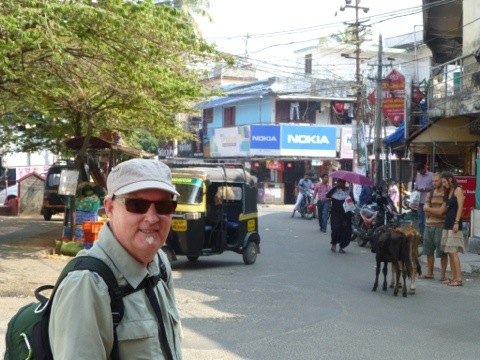